THE ROMAN POET JUVENAL ASKED, “QUIS CUSTODIET IPSOS CUSTODES?” (“WHO WILL GUARD THE GUARDS THEMSELVES?”)

During the month of April, 1963, a number of strange events (or metaphoric “threads”) occurred that, when woven together, suggest that they had much in common, in the context of the evolving plot to murder President Kennedy and ensure that a major change in the direction of the United States would be effected: A military/intelligence take-over of the U.S. foreign policy was the immediate goal of the forces behind the 1963 coup d’état.  Domestic policy was the secondary, albeit inseparable, goal.

The following list includes some of the most notable events that took place over a two-week period of that month:

Someone – to this day it is not clear who – shot a bullet through the window of retired General Edwin Walker, a staunchly-conservative veteran of World War II and the Korean War.  Walker, despite having been appointed by President Eisenhower to successfully lead the desegregation of Little Rock Central High School in 1957, later became associated with segregationists and members of the right-wing organization the John Birch Society.  In 1961 he became the only Army general to resign after his controversial actions related to allegedly indoctrinating troops under his command in Germany with materials that claimed that communists were in control of much of the government and were behind the racial integration program.

In 1961-62, Walker began making numerous public speeches and, with the backing of the oil billionaire and radio-host H. L. Hunt, he began a campaign to run for governor of Texas, but finished last in the Republican primary election to John Connally.  On December 4, 1961, his photo appeared on the front cover of Newsweek magazine under the title, “Thunder on the Right.”  It had become widely known in the area that Walker lived on Turtle Creek Drive near downtown Dallas.

The bullet hit the wooden window frame, which deflected it away from Walker.  Many researchers believe that it is unlikely that Oswald was involved in that shooting, given that at least one eyewitness stated that there were two men on the scene during the shooting, who escaped in separate cars immediately afterward; Walker himself stated that, after going upstairs to get a pistol, he came back down the stairway and, through a front window: “I saw a car at the bottom of the church alley just making a turn onto Turtle Creek.  The car was unidentifiable. I could see the two back lights . . . I could see it moving out . . . [it] would have been about at the right time for anybody that was making a getaway.”[i]  Oswald did not have routine access to a car.

Many, if not most, researchers have not only discounted the notion that Oswald fired the shot at Walker but believe that it was part of the plan, intentionally designed to set him up as a patsy as a specific instance of his supposed capacity for violence.  Given General Walker’s reputation as an arch-enemy of the Kennedys, especially their efforts to pass civil rights reforms, it is possible that he volunteered his assistance in such a caper.  That Jack Ruby had casually “fingered” Oswald soon after the event conveniently helped the commission to make a case of violent behavior for a man not otherwise known for that.

As noted below, at least before Marina Oswald told the Warren Commission that she believed that Lee was the shooter (the pressure on her — including threats of deportation — must be considered regarding everything she said), Walker suspected others of the act, specifically a neighbor of George De Mohrenschildt named Dr. William Wolf. As noted below, Wolf would die nine days later in a fire in his apartment.

LBJ Reordered Security: From JFK to Himself

White House aide Joseph W. Shimon worked in the highest security levels of the Kennedy administration as a liaison with the Justice Department, the CIA and the DC Metropolitan Police Department. He had many contacts at the MPD, as that is where he started his law enforcement career decades earlier.

His college-age daughter, Toni, who usually lived on Long Island with her mother, spent the Easter weekend with her father, who lived across the Potomac River, in Arlington, Virginia. According to researcher/author Peter Janney, on a walk that weekend, Shimon told her about something that had been bothering him:[ii]

“The vice president [Lyndon Johnson] has asked me to give him more security than the president,” said Shimon. As they continued walking, Toni’s mood began to darken. There was something ominous in her father’s voice, she remembered feeling.

“What’s he afraid of, Dad?” she asked her father.

“What do you think?” Her father responded, wanting to see if she understood and connected the dots. There was an awkward silence. She knew she was being tested. Toni would remember that moment and the darkness that had come over her that day.

“Something’s coming down, Dad,” she said. “Does President Kennedy know about this?”

“I haven’t mentioned it,” she remembered her father telling her. “What do you think?” her father asked again.

“Something’s going to happen and Johnson knows about it,” Toni immediately responded.

That incident may have been first sign of a continuing pattern that lasted the next seven months. It was no coincidence that all local, state and federal law enforcement officers, were removed in Dallas, unlike any other motorcade. The last vestiges of President Kennedy’s protection stopped at the corner of Houston and Elm Streets as the limousine entered Dealey Plaza. The fact that the only remaining motorcycle escorts – which were supposed to be flanking the rear quarter-panels of the limousine – had backed themselves completely away from the presidential limousine and began riding alongside the Secret Service car after the turn on Elm Street is proven by a photograph taken moments before JFK was hit for the first time by Phillip Willis.[iii]

This point was of course ignored by the Warren Commission, along with numerous other such indications of their complicity in the cover-up of JFK’s assassination.

Another marker for the same point, according to fifty-nine (59) witnesses, was their certainty that the limousine slowed, and either nearly stopped, or came to a complete momentary stop, as the head shots were fired.[iv]  The fact that the brief stop was not apparent in the Zapruder film indicates that at a number of frames had been removed from it to achieve that result; and that could only have been accomplished by both preplanning and post-manipulation of that film, suggesting that it was not a spontaneous after-thought that Mr. Zapruder was positioned there for that purpose.

Certain agents stated that the reason for reducing the number of motorcycle escorts in the motorcade, and cutting two agents who normally rode on the back bumper of the presidential limousine, was because President Kennedy wanted to get “closer to the people” and that he had suddenly objected to the noise of too many motorcycles around him, despite the fact that nothing of the sort impeded the motorcades in San Antonio and Houston the day before the Dallas event.

Yet neither of those assertions had ever been expressed by JFK before, and many of Kennedy’s staff, including his primary advance man Jerry Bruno, had expressed concern about the level of hostility towards the President by right wing extremists in Dallas.  According to the long-time JFK assassination researcher Edgar Tatro, Jerry Bruno had become so upset about the overall security risks in the Dallas motorcade – as planned by John Connally at Johnson’s direction leading to Bruno’s utter frustration – he had effectively been forced to step aside, replaced by LBJ sycophant Bill Moyers who naturally approved everything that Bruno had objected to. Tatro said: “Bruno was enraged when he testified to the House Select Committee on Assassinations (HSCA); he said ‘Connally didn’t care about Kennedy, he was a son-of-a-bitch’.”[v]  Indeed the HSCA Report indicated that Bruno testified that the decision was finally made when, “I met with O’Donnell and Moyers who said that Connally was unbearable and on the verge of cancelling the trip. They decided they had to let the Governor have his way.”

The conversation of Mr. Shimon with his daughter seven months before the Dallas trip, described by author Peter Janney, should put to rest any remaining doubt about the real source of the request for the reduced presidential protection that took place in the Dallas motorcade: The planning for that particular motorcade – and only that one – was managed entirely by Vice President Lyndon Johnson and his sycophantic assistants, including Cliff Carter, Bill Moyers and US attorney (later promoted to Federal Judge) Barefoot Sanders, who resided in Dallas.

On behalf of Lyndon Johnson, his highest-level aide at that point, Walter Jenkins, wrote a letter to George DeMohrenschildt (then acting as Lee Harvey Oswald’s “best friend”) in response to his request to get an appointment with Johnson: 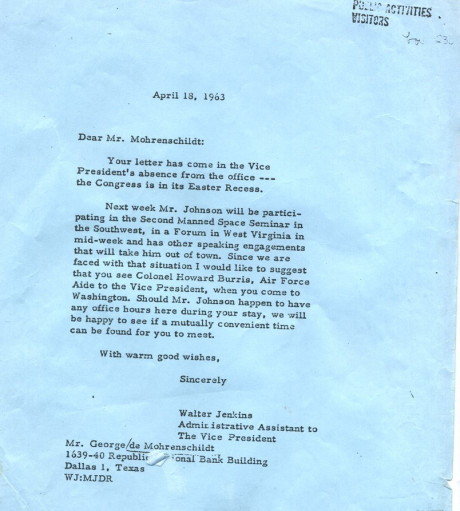 Having served his purpose as the enigmatic “handler” of Lee Harvey Oswald during the period of his stay in the Ft. Worth-Irving-Dallas area of Texas, it appears that CIA officials moved him into other positions, probably to exit him from the play then underway. George would visit Washington briefly before making an appearance at one of the most exclusive men’s clubs in New York City – the Knickerbocker Club.

There he met with a CIA operative code-named WUBRINY at a meeting attended by C. Frank Stone III, head of the CIA’s European clandestine section, and M. Clemard Joseph Charles, the banker who de Mohrenschildt would become closely identified with in Haiti. From New York he returned to Washington, where, in the process of setting up mineral concessions and arranging to acquire a sisal plantation in Haiti, de Mohrenschildt and Charles would meet, mysteriously, with Lyndon Johnson’s military advisor Howard Burris, to set up a meeting with Johnson himself by his highest-level assistant, Walter Jenkins.[vi]  Due to Johnson’s customary secrecy measures, it is not clear when and where that meeting was held or what was discussed, but that kind of secrecy suggests the subject was of a sinister nature.

According to Penn Jones, DeMohrenschildt “may have been rushed away due to the strange death of his next door neighbor, Dr. William T. Wolf, who burned to death in his apartment on that day.  General Edwin Walker said he suspected Wolf in relation to the Walker shooting attempt.”[vii]

The President of the United States is like a pilot and the election is when the nation picks an airplane and pilot for the next four years. Once you pick him, and you’re flying across water in bad weather, don’t go up and open the door and try to knock him in the head.  He’s the only pilot you have and if the plane goes down, you go with it.  At least wait until next November before you shoot him down.

The bizarre nature of Vice President Johnson’s actions – possibly related to his propensity of drinking too much Scotch whiskey – suggest that he, too, had recently been involved in a “touchstone” meeting back in Washington, or Langley, Virginia, before showing up in Dallas at that curious point in time.  But the context here is not merely his actions, it is the totality of these numerous activities, probably many others unaccounted for as well, that belie a continuum of events playing out, all initiated well before April of 1963.

These events were most likely merely the result of an interim check-point whereby all the participants were given a “green light”, as if to say “everything on track for The Big Event,” proceed according to plan.

[viii] See this Google Books link for further details on that chapter of Albarelli’s book.  Also see this page on the Spartacus Educational website.

Reprinted with the author’s permission.

Why Trust These People?

Dispatch From the Front

A Report From Alaska: Hamburger Prices Are Up 74%